What is carbon cake and how long does it take to develop?

Developing a good cake can take quite some time, so they key ingredient is patience! Beyond that, there are several factors that affect cake development, such as the tobacco you smoke, the briar itself, and your own smoking habits. Because of these and other variables, there is no standard time frame in which a cake develops, and each pipe will likely take a different amount of time.

Some pipes may begin developing a cake after only a few bowls. But it's more common to take far longer. Depending on your smoking frequency, it's not uncommon to smoke ten, twenty, or thirty bowls before you notice the evidence of a carbon cake beginning to form. I've seen some pipes take over a hundred bowls before they developed a decent carbon lining in the bowl.

New smokers often wonder what the cake looks like. Once the cake starts forming, it will be unmistakable. It is a hard, black residue that lines the inner walls of the bowl. In appearance, it looks like a thin layer of coal. After a cake begins to form, it's simply a matter of managing it by careful reaming to maintain the desired thickness. As a general rule of thumb, the cake should be kept at the thickness of a dime, or about 1-3 millimeters. If it gets too thick, it can actually crack the bowl of your pipe, because it expands at a different rate than the briar. Typically, you normally don't want to completely ream the bowl (unless you are restoring pipes), since you would then have to break it in all over again.

One of the most common problem areas for cake development is bottom of the tobacco chamber. This is where moisture tends to pool during a smoke. This makes the tobacco in the heel of the bowl difficult to burn and many folks understandably dump it out rather than fry their tongues trying to burn it to ash. This combination of moisture and unburned tobacco greatly retard or even prevent the development of carbon at the bottom of the tobacco chamber.

Another common problem is the cake forming unevenly. If the cake is thicker in some spots than in others, it's a good idea to ream the cake to make it even. If left to develop unevenly over time, it can create a bottleneck effect, making it difficult to fill and clean the bowl. As noted above, the uneven cake can also produce adverse effects on the briar due to expansion and contraction during combustion.

Although it is desirable to develop an even carbon layer throughout the bowl, it should not be something that detracts from your enjoyment of pipe smoking. Many folks spend far too much time being concerned about this. Remember, you didn't start smoking so that you could go around developing carbon cake inside pipe bowls! Hopefully, you chose to smoke because you enjoy it for various reasons. The carbon cake, while important, shouldn't become a matter that you obsess about. Simply enjoy your pipes, and the cake will develop naturally over time. If it isn't perfect, don't worry; it can be easily maintained with a simple pipe reamer.

Below are a couple photos of a pipe with clearly developed carbon cake. These photos are not perfect guideline examples, but they will give you some concrete idea of what the carbon cake looks like. 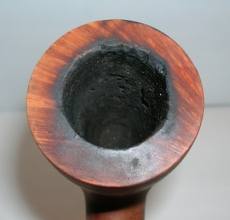 This pipe has a damaged and charred rim--something that can be avoided by exercising care with your pipes. It is NOT necessary to have carbon build-up on the rim in order to develop cake in the bowl. A little care and regular cleaning can keep the rim looking good. 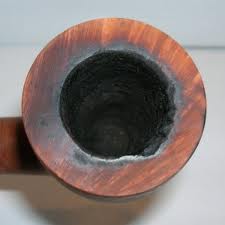 Crafted by Mikka Sorensen at 7:11 AM